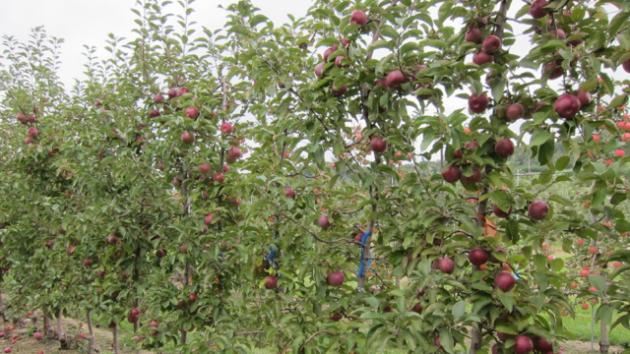 Have you ever considered planting a high density orchard at home?  Nearly full production can be achieved within four years, less space will be required, a larger variety of fruit may be planted and the training and pruning is quite simple.  Further, the horticultural techniques learned in training these trees are easily applied to controlling the growth of other plants in the landscape.  Researchers have developed the Tall Spindle System for apple production that may be of interest to gardeners who would like to try something different.  There are several key components used in this system.

Fully Dwarf Rootstock.  Apple trees need to be propagated on either M.9 or B.9 rootstocks as fully dwarfing rootstocks.  A brief list of nurseries that sell trees budded on these rootstocks is at the end of this article.

Minimal Pruning at Planting.  Trees are pruned minimally when planted.

Support System. A support system is necessary since trees propagated on dwarfing rootstocks will not stand up without support.  Several approaches can be taken to provide adequate tree support. The support system can be a single 10-foot post per tree pounded into the ground, a single smaller post that is supported by a single wire trellis may be used, or a 4-wire trellis may be selected that is similar in structure to a grape trellis but is at least 8 feet in height.  Probably the easiest system is the one-wire trellis where a post that is at least 4 to 5 inches in diameter and 10 feet long is pounded in the ground at spacings of about 30 feet.  A #9 or #10 wire is positioned at a height or 6 to 7 feet between these posts.  Put a metal conduit post by each tree and attach these securely to the wire.

Tree Training. Growth of trees is controlled primarily by bending side branches to the horizontal and securing them at that angle. This slows the growth of the trees and makes them much more productive.

Planting and Care the First Year. Using this system, trees can be planted as close as 4 to 5 feet apart. Tree spacing in commercial orchards using this system is frequently 3 feet between trees. Trees should be planted so that at least  4 to 6 inchesof the upper portion of the rootstock is above ground level.  Identification of the rootstock is generally quite easy since the scion cultivar often attaches to the rootstock at an angle about 12 inches from the bottom of the tree.  The tree should be tied initially to the post and as the tree grows new growth should also be secured to the post. No pruning should be done at planting time unless a side branch is larger than half the diameter of the trunk of the tree, in which case it should be removed.  The tree can be fertilized once or twice with high nitrogen liquid fertilizer starting about three weeks after planting.  A supply of water should be available for the entire growing season to assure a continuous and adequate supply of moisture.  A soaker hose running along the base of these trees is a simple and effective way to provide moisture.  A critical component of this system is minimal pruning. Tree vigor should be kept in check by tying down limbs and rapidly growing shoots.  This can be accomplished by tying limbs down in a horizontal position using tape, rubber bands, weights or similar material.

The Second Year. It is important to make sure that no limbs get very large.  Cut off any limb that is half the diameter of the trunk of the tree or larger.  This is best done early using a horizontal bevel cut which leaves no bark showing on the top of the cut off limb but some bark is apparent on the bottom where new and weaker shoots can emerge.  Continue to weight down or tie down shoots to a horizontal position.  Pinch back the tips of all shoots in the top half of the trees when shoots are 3 to 6 inches in length, generally early June.  Repeat this process as new shoot emerge in the top half of the tree.  The tree can bear a few fruit the second year.  Thin these to a single fruit in a cluster spaced 8 to 10 inches apart.  The presence of fruit will help restrict growth and keep the tree within the allotted space.  Normal fertilization and pest control practices should be followed.

The Third and Subsequent Years. The goal with this system is to develop a tree with many small branches that are horizontal to the main trunk of the tree.  These are the most productive branches on a tree.  Continue to remove any large branches (generally larger than 3/4 inch in diameter) using the previously described bevel cut.  Continue to pinch shoots when they reach 3 to 4 inches in length and bend down vigorous and upright branches.  Continue to thin fruit so that they are spread no closer than 6 to 8 inches.  It is critically important that when the trees reaches the top of the training post that their top should not be pruned or cut in any way.  Any pruning will make the top of the tree vigorous and unproductive thus jeopardize the balance between fruit production and vegetative growth.  The top should be allowed to flower, fruit and bend over and it should be cut only when the shoots there are at a horizontal or lower.  As the trees get older, many of the small branches that were bent to the horizontal will fruit and ultimately become unproductive. These branches can them be removed or cut back to a lateral branch extending in a horizontal direction.

The success of this system is based upon several important horticultural principals.  Bending shoots to the horizontal position rather than cutting will reduce vigor in limbs and make them more productive. Removal of large limbs with a bevel cut does not stimulate the growth of a tree. Fruit production in the tops of trees is one of the best ways to control growth in the tops of trees.

Watch the following YouTube video for a demonstration of implementing the Tall Spindle System.

Nurseries where dwarfing trees may be purchased: