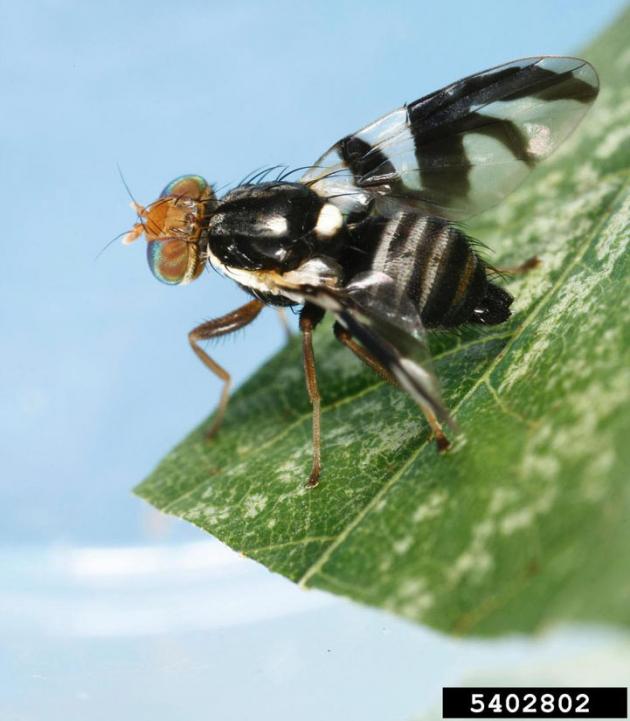 The adult fly (Fig. 1) is black with white stripes across the body, three on the male and four on the female. There is a prominent white spot in the middle of the back.  The wings are clear with four black bands shaped somewhat like the letter “F”.  The adult is about 3/16 inch (5mm) long with a ½ inch (13mm) wingspan.  The abdomen of the female is more sharply pointed and curved than that of the male.  The larva is small, creamy white, legless, and has two dark mouth hooks at the pointed end.  The puparium resembles a dark brown grain of wheat.

In most cases there is only one generation of apple maggot a year. The female will lay her eggs singly beneath the skin of the fruit and the larvae will hatch 3-7 days later and tunnel into the fruit pulp. The infested fruit will usually drop to the ground, the larvae will stay in the fruit until they reach maturity at that time they make an exit hole in the skin of the fruit and drop to the ground and enter the soil to a depth of 2-5 cm where pupation occurs. The pupae will stay dormant over winter where they may persist for several years or emerge in late June or July as an adult.  Adults  reach sexual maturity 7-10 days after emergence. As the flies mature and mate they respond to fruit shape and fruit odor.  After mating, a single female fly is capable of laying more than 200 eggs in her lifetime. Adults usually die after 3-4 weeks.

Traps can be used to determine if you have apple maggots.  The traps that capture both sexes are based on visual attraction, or visual plus odor attraction. They are coated in sticky material and are usually either flat-surfaced and colored fluorescent yellow (resembling foliage), or spherical and dark-colored (resembling fruit). You can also add a synthetic apple volatile to the trap, which increases the effectiveness of the trap.  Figure 2 shows the two  types of damage that the apple maggot can do to the apple fruit.  The center apple with the sunken, misshaped dimpled area is caused by insect egg laying activity. The second injury occurs as the maggots tunnel through the flesh. As a result, the pulp breaks down, discolors, and starts to rot. 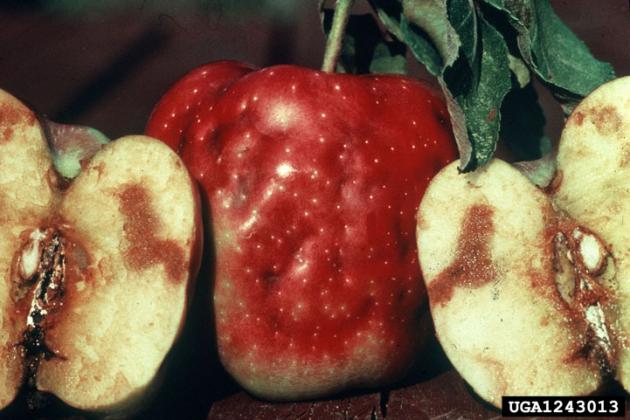 When apple maggot is detected on your fruit, the fallen and infested fruit must be removed and destroyed.  If possible, wild and abandoned host trees should also be destroyed.