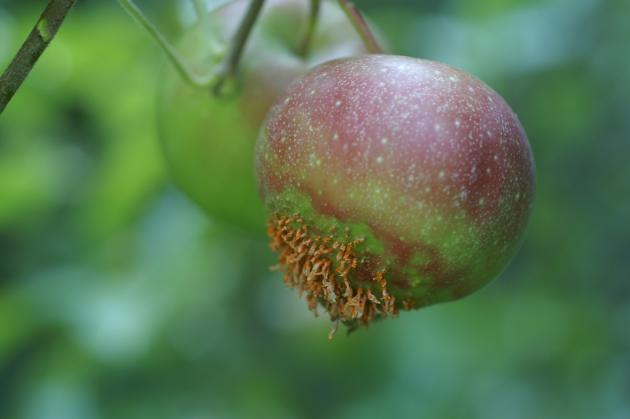 Typically, an infection on apple fruit shows up first as a slightly raised purplish area on the calyx end of the fruit. On mature fruit, the lesion is sunken and dark green or purple (fig. 1). Usually, the entire calyx end of the fruit is involved, and the flesh is deformed to the core. The fungus may produce powdery, fluorescent orange spores in tubelike structures (aecia) on the calyx end of apple fruit (fig. 2). Similar structures are produced on hawthorn leaves and fruit. These spores infect young stems of the red cedar, resulting in cankers in branches 2 to 5 years old (figs. 3, 4). Spores produced on these cankers serve as inoculum for apple and hawthorn. 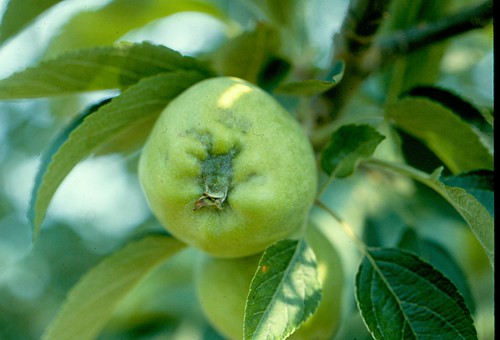 Basidiospores are produced on quince rust cankers on the cedar tree and released under conditions similar to those for cedar-apple rust. Fruit infection occurs only during extended wetting periods when the blossom is most susceptible, primarily from pink to the petal fall stage. Within a few weeks after infection, fruit lesions become apparent. In late summer, aecia may form on infected apple fruit. These aecia produce spores that re-infect young stems on the cedar tree and initiate cankers, which eventually produce the spores that infect apple and hawthorn. There is no secondary infection by the rust diseases on apple or hawthorn. Although infected apple fruit may or may not produce aecia, leaves and fruit of infected hawthorn commonly produce aecia. Thus, quince rust cankers tend to be more prevalent and disease potential greater in areas where hawthorns are growing in proximity to cedars, such as in pastures adjacent to an orchard. Because quince rust cankers continue to sporulate for several years, inoculum pressure tends to be more constant from year to year than for cedar-apple rust, which is influenced by infection conditions during the season two years earlier. 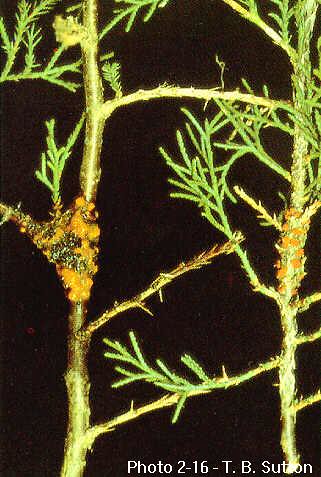 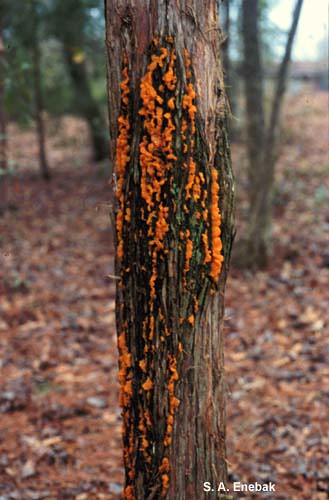 Figure 4. Quince rust cankers are perennial and may produce spores for many years, as seen on this eastern red cedar tree trunk. Photo: S. A. Enebak, Auburn University.

Original text prepared by K. S. Yoder and A. R. Biggs. The original version of this article appeared in The Mid-Atlantic Orchard Monitoring Guide (NRAES-75) and is reproduced with permission from the Natural Resource, Agriculture, and Engineering Service, Cooperative Extension, 152 Riley-Robb Hall, Ithaca, New York 14853-5701, U.S. A. (607) 255-7654. It has been edited for presentation here by Alan R. Biggs, West Virginia University.