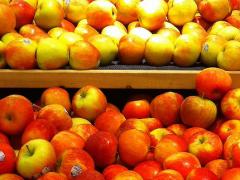 A key quality attribute of apple fruit is its peel or skin color, which affects consumer preferences. Immature fruits are green, and as the fruit ripens the green may fade partially or completely, resulting in very pale cream to green background colors. Red cultivars result from a superimposed accumulation of the red pigment anthocyanin. Anthocyanin accumulation in apple fruit can be affected by environmental, nutritional, and orchard management factors, the stage of maturity of the fruit, and by the microenvironment within the canopy. Note in the photo above, the difference in color of Honeycrisp apples grown in Minnesota (lower bin) and Washington state (upper bin).

Apple fruit peel color is one of the main traits people look at to differentiate among cultivars and thus should be considered when planting any cultivar, but particularly strains of cultivars with varying red pigmentation. For instance, Fireside, a striped cultivar, and Connell Red, a red-blushed sport of Fireside, do not deviate from their respective patterns within a tree or across the genotype even after many years of asexual propagation. In contrast to what is observed in these cultivars, fruit pigmentation in Honeycrisp apple can adopt two basic patterns: blushed or striped. Blushed fruits are defined as those that never show stripes, even in less colored areas of the peel. These two color patterns can appear together on the same tree, and even on the same spur, a very unusual phenomenon in apple.

Red color development varies with environmental conditions. Light and temperature are key factors. Anthocyanin production in apples is absolutely light dependent; not only the intensity but also the quality of light influences anthocyanin formation. Low temperatures increase and high temperatures reduce anthocyanin concentration in apple peels. For instance, Honeycrisp grown in the cooler, northern climes develops a cherry-red blush or stripes. As this cultivar is grown in warmer, southern environments, red color development is reduced.

How to improve red color development in red-fruited cultivars?  Some production methods that can be used include: