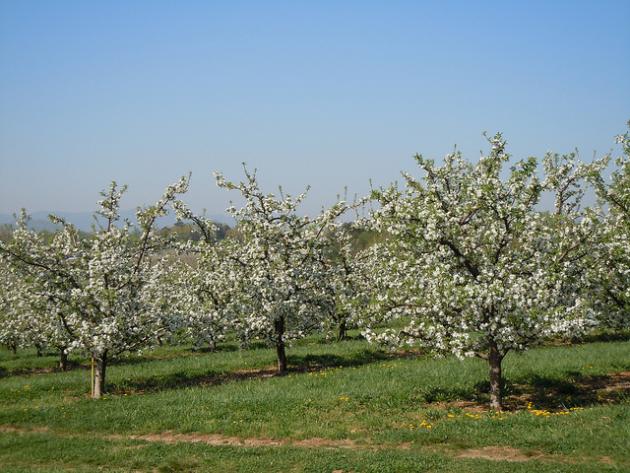 Apple trees begin visible growth in the Spring of the year after having had their chilling requirement met, measured as chilling hours (800-1200 hours),  followed by a specific amount of warm weather, measured as growing degree-hours (approx.. 300 hours).  The first growth to appear in the Spring is the leaves and the trees will bloom approximately 3-4 weeks later. The date on which apple trees bloom in a location can vary annually based upon fluctuating winter and spring temperatures and when the trees have had their chilling and heating requirement met.  This can potentially result in a 2+ week difference in bloom from year to year in a single location.  Differences in bloom date from region to region can also vary significantly based on the time and duration of winter and spring temperatures.  Generally, apple trees grown in more southern and warmer climates with a shorter and mild winter will bloom earlier.  For example, in western North Carolina apple trees will generally bloom in mid-April whereas apple trees in Minnesota do not bloom until a month later, generally in mid-May.

Chilling Requirement – A requirement for apple trees to receive a certain number of chilling hours during the winter to overcome dormancy.  The optimal chilling temperature for apple tress is 40-45°F.

Growing Degree-Hours –  The requirement for apple trees to receive a certain number of hours of  temperatures above 40°F after their chilling requirement has been met before growth begins in the spring.