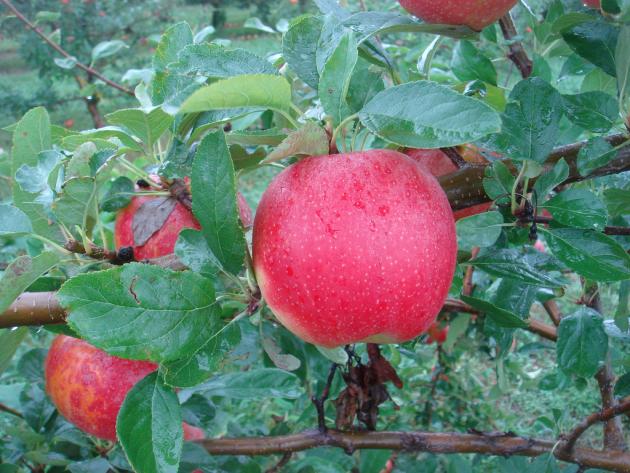 Several variables should be considered when selecting apple cultivars to plant. Important factors include cold hardiness (some cultivars will not survive extreme winter low temperatures), heat tolerance,  disease resistance, time of harvest, intended uses and time of bloom. Apples require cross-pollination between two cultivars that must bloom at the same time.

Commercial orchardists must consider cultivars for an intended market. For example, processors will pay a premium price for ‘Northern Spy’ for pie filling, but there is little demand for ‘Northern Spy’ as a fresh eating apple. People tend to buy attractive looking apples, so they may be attracted to large red ‘Rome Beauty’ and pass up the less attractive but fuller flavored ‘Newton Pippin’. Farm market operators can modify people’s buying habits by offering free samples, but this is not possible for large chain stores. Some cultivars are adapted to specific climates and other cultivars are adapted to varying climatic conditions. For example, ‘Cortland’ grown in northern New York, is a medium-sized firm apple and about 70% of the fruit surface is colored red. ‘Cortland’ grown in more southern locations are very large, soft fruit, with poor flavor and less than 20% of the surface is colored red. ‘Golden Delicious’ produces larger better flavored fruit when grown in the mid-Atlantic region than when grown in northern New England. ‘Jonagold’ is a medium to large sized, firm, red fruit with superior flavor when grown in New York. Grown in the mid-Atlantic region, ‘Jonagold’ is a very large yellow fruit, with moderate flesh firmness and acceptable eating quality. For the wholesale market, ‘Jonagold’ grown in the mid-Atlantic region are at a disadvantage with those grown in the north, but it can be grown profitably for local sales in the mid-Atlantic region. ‘Pink LadyTM” has a very long growing season and can be grown and matured in more southern climates but cannot be grown to maturity in more northern climates due to a shorter growing season.   ‘Gala’ seems to be equally well adapted over a wide range of growing conditions.