Fire blight is a destructive bacterial disease of apples and pears that kills blossoms, shoots, limbs, and, sometimes, entire trees. The disease is generally common in most apple-growing regions of the US; although, outbreaks are typically very erratic, causing severe losses in some orchards in some years and little or no significant damage in others. This erratic occurrence is attributed to differences in the availability of overwintering inoculum, the specific requirements governing infection, variations in specific local weather conditions, and the stage of development of the cultivars being grown. The destructive potential and sporadic nature of fire blight, along with the fact that epidemics often develop in several different phases, make this disease difficult and costly to control. Of the apple varieties planted in the US, those that are most susceptible include ‘York’, ‘Rome’, ‘Jonathan’, ‘Jonagold’, ‘Idared’, ‘Tydeman’s Red’, ‘Gala’, ‘Fuji’, ‘Braeburn’, ‘Lodi’, and ‘Liberty’. ‘Stayman’ and ‘Golden Delicious’ cultivars are less susceptible and all strains of ‘Delicious’ are highly resistant to fire blight, except when tissues are damaged by frost, hail or high winds.

The season’s first obvious symptoms of fire blight are blossom blight symptoms, which most often appear within one to two weeks after bloom.  When infected, the entire blossom cluster wilts and dies, turning brown on apple and quite black on pear. When weather is favorable for pathogen development, globules of bacterial ooze can be seen on the blossoms. The spur bearing the blossom cluster also dies and the infection may spread into and kill portions of the supporting limb. The tips of young infected shoots wilt, resulting in a very typical “shepherd’s crook” symptom. Older shoots that become infected after they develop about 20 leaves may not show this curling symptom at the tip. As the infection spreads down the shoot axis, the leaves first show dark streaks in the midveins, then wilt and turn brown, remaining tightly attached to the shoot throughout the season. As with blossom infections, the pathogen often invades and kills a portion of the limb supporting the infected shoot. The first symptom on water sprouts and shoots that are invaded systemically from nearby active cankers is the development of a yellow to orange discoloration of the shoot tip before wilting occurs. In addition, the petioles and midveins of the basal leaves on such sprouts usually become necrotic before those at the shoot tip.

Overwintering cankers harbor the fire blight pathogen from one season to the next and are often clearly visible on trunks and large limbs as slightly to deeply depressed areas of discolored bark, which are sometimes cracked about the margins. The largest numbers of cankers, however, are much smaller and not so easily distinguished. These occur on small limbs where blossom or shoot infections occurred the previous year and often around cuts made to remove blighted limbs. Since many of these cankers are established later in the season, they are not often strongly depressed and seldom show bark cracks at their margins. Also, they are often quite small, extending less than one inch, with reddish to purple bark that may be covered with tiny black fungus fruiting bodies (most notably Botryosphaeria obtusa, the black rot pathogen of apple).

Management of fire blight is multi-facted and is based primarily on forecasting models, antibiotic sprays, and, in locations where the pathogen is resistant to antibiotics, biological materials that act through competitive exclusion and/or antibiosis. 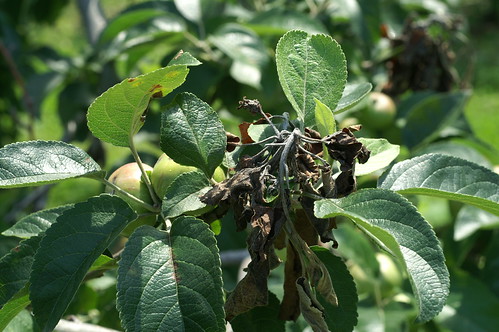 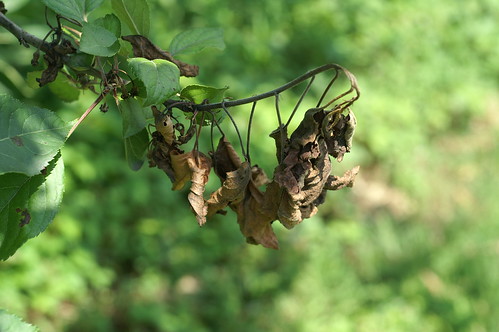