Sooty blotch and fly speck are caused by a complex of fungal pathogens that commonly appear together as surface blemishes on apple (and pear) in late summer and fall. Although these fungi may shorten the storage life of fruit due to increased water loss, they do not cause decay, and losses are attributed to unacceptable appearance. During wet growing seasons, losses of 25 percent or more are commonly found, even in orchards treated with fungicides. Sooty blotch appears as sooty smudges or olive-green spots on mature fruit. Individual spots or smudges vary from discreet circular colonies to large lesions with diffused margins. Different colony appearances are attributable to several different pathogens that comprise the disease complex. Fly speck is characterized by clusters of 10 to 50 sharply defined black shiny specks on the fruit surface. These superficial colonies are round to irregular and usually measure 1/16 to 1 inch in diameter. The individual dots or specks are fruiting structures in which spores are formed that cause secondary spread. Although these pathogens may appear separately, they are commonly found together on the same fruit. Typically fruit symptoms are observed by the first of July and become more easily found as the season progresses. There are no important significant differences among apple cultivars in susceptibility to these fungi, but symptoms are more apparent on yellow, green, or light colored fruit. Fruits of apple and pear having the thickest cuticle appear to be more severely affected. Early-maturing cultivars may escape sooty blotch and fly speck infections in some years. Disease management is based on proper tree spacing and pruning to optimize air movement and spray penetration, as well as use of fungicides prior to rain events in summer. Several models are under development to predict disease onset and reduce fungicide use. Approximately 100 different fungi have been associated with sooty blotch and fly speck. Fruit with these surface blemishes are not harmful to consume and the fungal growth usually can be easily removed by scrubbing. 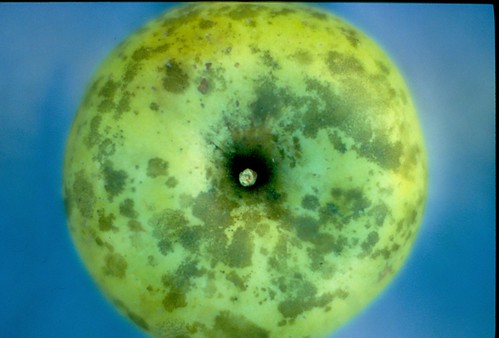 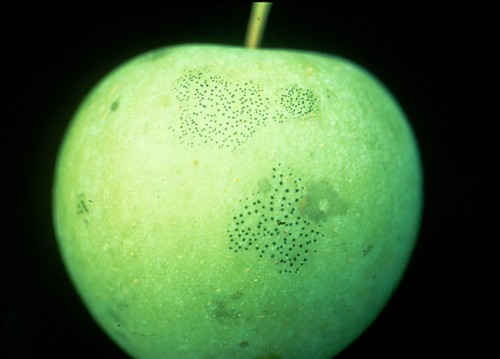