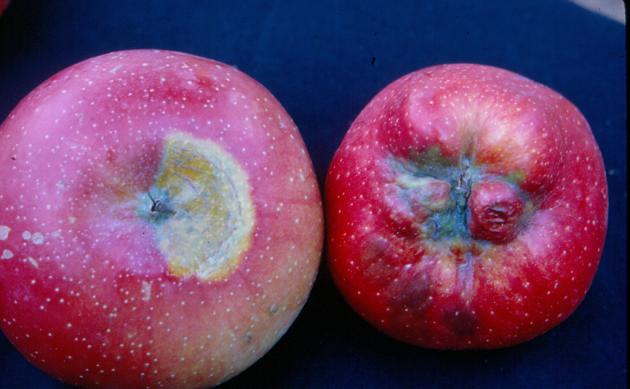 Cedar apple rust can infect leaves and fruit of most cultivars in the United States, where the alternate host, Eastern Red Cedar, occurs. A notable exception is ‘Delicious’, which is nearly immune.

The most conspicuous symptoms on apple are bright orange, glistening lesions on the leaves. Lesions which are not inhibited chemically may form small tufts of spore-producing structures (aecia) on the lower surface of the leaf by July or August. Cedar-apple rust appears on fruit first as bright orange, slightly raised lesions, but may take on a more brown and cracked appearance as the fruit enlarges. Usually some of the orange color remains at harvest as evidence of the early season infection. Sporulation of fruit lesions is less common than that of leaf lesions. Stem infection causes a slight swelling of the stem and may result in abscission of the young fruit. On the cedar tree, cedar-apple rust produces brown, globular galls ranging in size from 1/4 inch to nearly two inches in diameter. These are dimpled like a golf ball in the dormant season, but produce gelatinous, orange spore horns during spring rains. 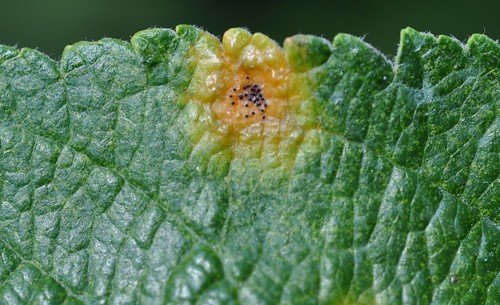 Figure 2. Cedar apple rust lesions produce two spore stages on apple. The black spots in the yellow lesion are the fungus’s pycnia. Pycnia contain + and – spermatia that must combine before the aecia stage is formed on the underside of the leaf. Photo courtesy of Alan R. Biggs, West Virginia University. 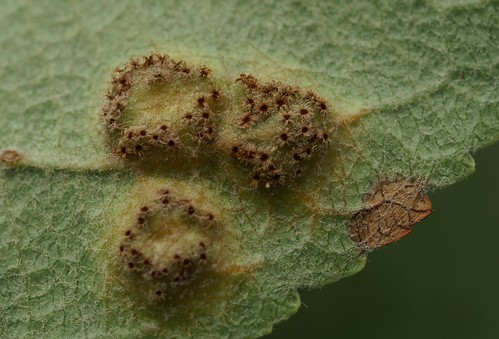 Quince rust infects fruit, but not leaves, of most apple cultivars. It infects both leaves and fruit of hawthorn. ‘Delicious’, which is nearly immune to cedar apple rust, is highly susceptible to quince rust.

Typically, an infection on apple fruit shows up first as a slightly raised purplish area on the calyx end of the fruit. On mature fruit, the lesion is sunken and dark green or purple. Usually, the entire calyx end of the fruit is involved and the flesh is deformed to the core. The fungus may produce powdery, fluorescent orange spores in tube-like structures (aecia) on the calyx end of apple fruit. Similar structures are produced on hawthorn leaves and fruit. These spores infect young stems of the red cedar, resulting in cankers on branches two to five years old. Spores produced on these cankers serve as inoculum for apple and hawthorn. 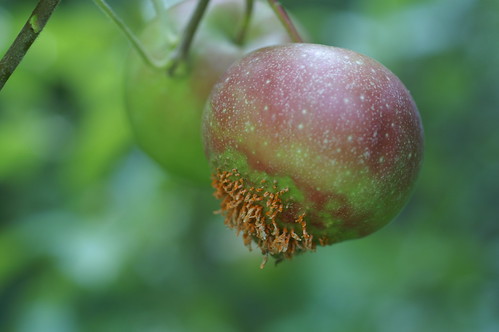