Powdery mildew can be a persistent disease of susceptible apple cultivars throughout the United States. It is one of the most predominant diseases in the more arid apple growing areas. It is the only fungal apple disease that is capable of causing infection without wetting from rain or dew.

The mildew fungus overwinters mainly as mycelium in dormant blossom and shoot buds that were formed and infected during the previous growing season. Conidia are produced and released from the unfolding leaves as they emerge from infected buds, usually at about the tight cluster stage of the healthy buds. As the shoots develop, all the leaves from the infected bud become infected (referred to as a primary infection). Disease develops at temperatures between 50 and 77 F, with an optimum of 66 to 72 F. Spore germination does not occur in the presence of free moisture. Early-season mildew development is affected more by temperature than by relative humidity. Abundant sporulation from overwintering shoots and secondary lesions on young foliage leads to a rapid buildup of inoculum. Secondary infection cycles may continue until susceptible tissue is no longer available. Since leaves are most susceptible soon after emergence, infection of new leaves may occur as long as shoot growth continues. Fruit infection occurs from pink to bloom. Overwintering buds are infected soon after bud initiation in early to mid-summer. Heavily infected shoots and buds are low in vigor and lack winter hardiness, sometimes resulting in a reduction of primary inoculum if temperatures go below -11 F. This phenomenon has been more commonly observed in colder apple growing areas (zone 6 and lower).

Disease management is based on increasing the frequency of effective fungicides during favorable weather for mildew and preventing establishment of mildew in developing buds. Several effective OMRI-registered, “organic” fungicide options are available. Mildew severity is related to cultivar susceptibility and the need for control measures depends on the intended market for the fruit. 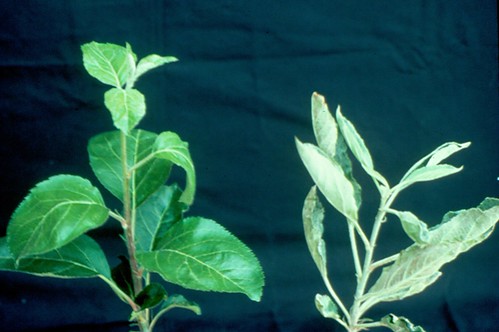 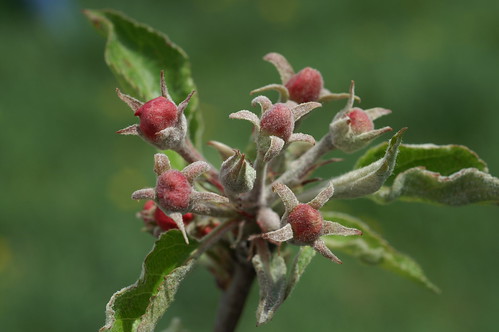 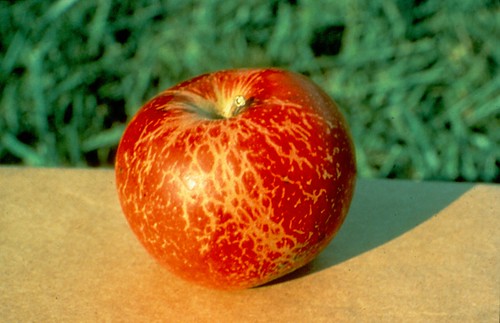 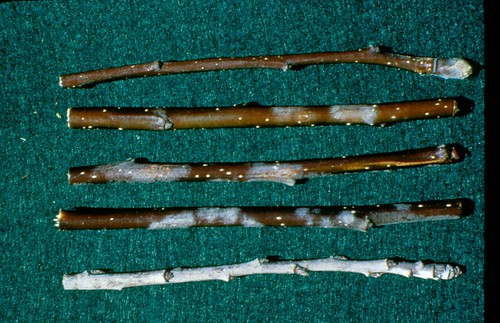 Whitish-gray mildew on dormant apple twigs; healthy at top. Photo from the archives of A. B. Groves, Virginia Tech.