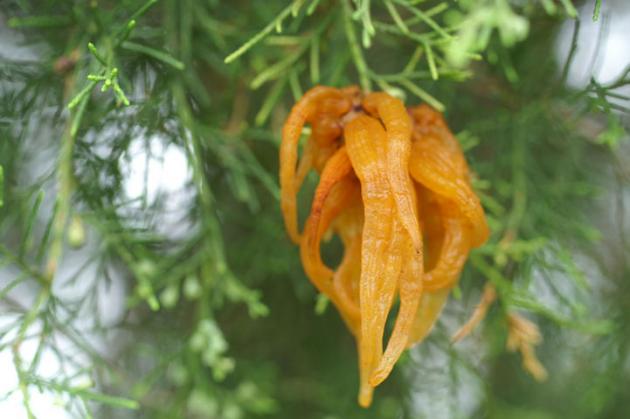 Cedar-apple rust is a fungus disease of apple and cedar and spends parts of its life cycle on each host. It is caused by Gymnosporangium juniperi-virginianae. The fungus can infect leaves and fruit of most cultivars in the eastern region. A notable exception is ‘Delicious’, which is nearly immune.

The most conspicuous symptoms on apple are bright orange, glistening lesions on the leaves (Fig. 2). Lesions may form small tufts of spore-producing structures (aecia) on the lower surface of the leaf by July or August (Fig. 3). Cedar-apple rust appears on fruit first as bright orange, slightly raised lesions, but may take on a more brown and cracked appearance as the fruit enlarges (Fig. 4). Usually some of the orange color remains at harvest as evidence of the early-season infection. Sporulation of fruit lesions is less common than that of leaf lesions. Stem infection causes a slight swelling of the stem and may result in abscission of the young fruit.

On the cedar tree, cedar-apple rust produces brown, globular galls ranging in size from 1/4 inch to nearly 2 inches in diameter. These galls are dimpled like a golf ball in the dormant season but produce gelatinous, orange spore horns during spring rains (Fig. 5). 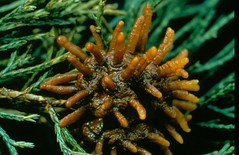 The fungus overwinters on galls on the cedar tree. Wetting of galls in the spring initiates expansion of the spore horns and production of basidiospores, which are carried to the apple tree to infect leaves and fruit during extended wetting periods. Basidiospores may be produced within 4 hours at 52°F to 77°F, and an additional 4 to 6 hours of wetting permits severe infection under heavy inoculum conditions. Basidiospores do not form at temperatures below 46°F, and the length of wetting required for infection is extended considerably at temperatures below 50°F. Lesions begin to appear 10 to 14 days after infection. In late summer, spores produced on the lower surface of infected apple leaves re-infect foliage of nearby cedar trees. These infections develop into galls, which produce spores in the spring following the next full growing season. A cedar-apple rust gall produces spores only one season. All of the lesions seen on the apple tree result from spores produced on the cedar; there is no secondary infection within the apple tree.

To control the disease, apply fungicides effective against the rust diseases periodically from the pink stage of bud development through third cover to protect the emerging leaves and developing fruit. Removing cedars located within a 2-mile radius of the orchard interrupts the life cycle of the fungus and makes control with fungicides easier. Removing all cedars within 4 to 5 miles of the orchard provides complete control.

Original text prepared by K. S. Yoder and A. R. Biggs. The original version of this article appeared in The Mid-Atlantic Orchard Monitoring Guide (NRAES-75) and is reproduced with permission from the Natural Resource, Agriculture, and Engineering Service, Cooperative Extension, 152 Riley-Robb Hall, Ithaca, New York 14853-5701, U.S.A. (607) 255-7654.